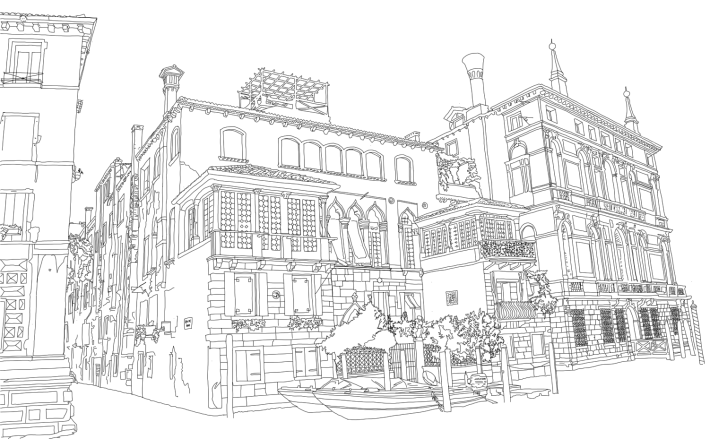 The city is the single largest visible living entity, said the large man standing, Alex. When I live in the city, I become part of an organism larger than me, more complex than me. My role becomes clearer. I am not in charge of finding food, shelter and react to dangers but I need to protect and extend the life in the city, I need to repair it as much as I can. My role, not only as an architect and a house builder but as a simple citizen is to repair life and continuity of life in the city. Let me give you some examples, the man said and turned a black notebook he kept on his desk.

About forty people were sitting in front of him, listening and writing notes. Julia sat in the last row, observing it all. The man started to draw with chalk on the blackboard.

This is a quick representation of this island. This is the building we are in, he said, this is the canal just next to the building, he said and turned over to the listeners. His hand was still scribbling. He moved on. This is the square in front of this building and these are the two residential buildings that we see out of the windows, he said, pointing out of the windows with his free hand, the other still drawing. The space of the square is too large, the building in which we are now and those buildings do not talk. The reason of this excess of space is the building that used to sit in the middle of the space that we now consider a square and was destroyed in a fire a hundred and forty years ago. I was not here at that time, you were not here, neither we have photographs, because photography had not been invented then. Still, from the documents of the era, the building was located here, with this shape, he said, and drew a larger square and two smaller rectangles on the top and on the side. What we now call a square was more of a tree lined avenue. A shallow water canal used to run along the avenue. This building was two floors lower and a public walkway existed between this building and the one which burned down. This is our focus, we repair the texture of life in the city. The language we use is the language of the city, Alex said. We learn the tools as we work, we learn to talk by talking and listening, this is the way of life. Life here is permanent interaction, adaptation and understanding, mutual support and competition, generating and bettering ideas until those ideas have an impact on others. This is what we do, this is what life is about here and everywhere else, to my knowledge.